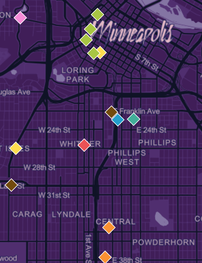 The University of Minnesota Libraries also have an interest in the geographies of Prince! They are helping researchers and teachers with a "Purple Syllabus", soon to be made public, and a Purple Map showing key locations relating to Prince's life and work.
​

We continue Prince's support of philanthropy and local artists by hosting the following organizations and artists in the Mondale Atrium (Humphrey Building) on Tuesday and Wednesday. You can click on their names to view merchandise, and contact them to discuss preordering for pick up at the symposium. We will also have "Prince from Minneapolis" T-shirts for sale during those two days.

The University of Minnesota Bookstore will sell a selection of books during the lunch hours, including books from authors presenting at the symposium.

The People's Museum for Prince 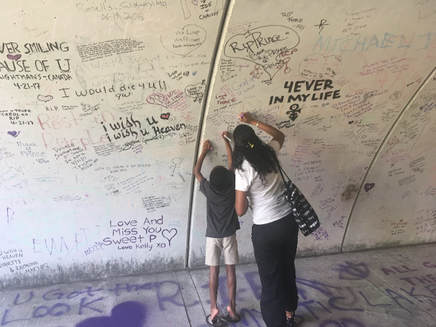 The People’s Museum for Prince is a curatorial project organized by Emma Balázs, designed to commemorate the ways Prince shaped and transformed personal lives. The first exhibition of the project will be held in Minneapolis in 2018 in collaboration with the "Prince from Minneapolis" symposium. Inspired by the public outpouring of deeply personal tributes following his death, the exhibition creates a visual and emotional mapping of Prince’s life, death and afterlife through the lens of those whose lives were profoundly impacted by the artist.

Using artifacts from a significant private local collection, interwoven with personal stories and objects contributed by people within and beyond the Minneapolis community, and supplemented by artworks and documentary materials, the exhibition explores the intimate, transformative connections between Prince and his people, whether colleague, friend, fan, or neighbor.

The Museum is seeking contributions of personal stories from people whose lives have been somehow transformed by Prince. Details on the website. Please send your proposals by February 1, 2018 to exhibitions@peoplesmuseumforprince.org.

The University of Minnesota and United Theological Seminary of the Twin Cities invites the public to submit academic papers, personal essays, poetry, spoken word, or visual art on the theology of Prince. Even though Prince sold more than 100 million records and won seven Grammy awards, little is known about the impact that religion and spirituality had on his music and artistic expression.

"Theology of Prince" explores the influence of religion, theology, and/or spirituality within Prince's work. In this session the University of Minnesota and United Seminary will curate and publish submissions from a variety of religious, spiritual, and theological perspectives on The Canvas, United's digital publishing platform. A $500 prize will be awarded to one entry in each category. In addition, writers, scholars, and artists who submit excellent work may published in a journal or edited volume book. 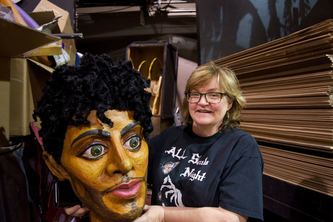 Mary Plaster is an artist based in Duluth, MN, with a BA in theatre design, an MA in studio art, and a DMin in Creation Spirituality (an intersection of art, science, and history of world religion). I have made street puppetry as an art activist for fifteen years and have worked with Minneapolis' In the Heart of the Beast for 10 years as MayDay art staff. The history of the Purple Rain Prince larger-than-life ancestor puppet begins with an outline of the 2016 MayDay. Prince walked in Parade section 4 "Reparations on Our Soul: Have Heart, De-Mask, Wild Seed", and was in the Ceremony at Powderhorn Park. Erin Sharkey (poet, stage manager) and Junauda Petrus (parade and ceremony artist), both from Free Black Dirt and active in the Black Lives Matter movement in the Twin Cities, requested I make him for MayDay in the one week after his death. They knew I have a series of ancestor puppets: Martin Luther King, Gandhi, Rosa Parks, Elizabeth Cady Stanton, John Lennon, Walt Whitman, Frida Kahlo, Cesar Chavez, Fred Rogers, Albert Einstein, and David Bowie. They knew my story of seeing Prince once in person when I was a painter on the set of the 1991 Special Olympics at the Metrodome and he was warming up for the opening ceremony performance. He was so generous to perform and I was surprised by his small stature but huge presence and amazing energy and talent. ​ 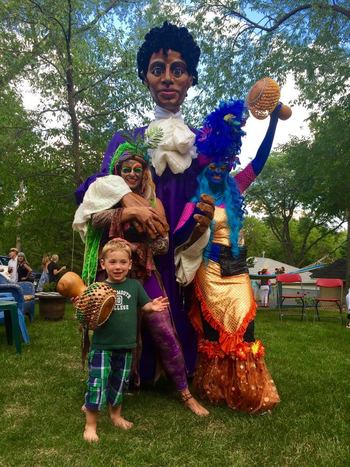 A new ancestor entity requires large detailed clay sculptures for his head and hands, on which I smooth seven layers of pasted paper (papier mâché). When dry I remove the lightweight shell, paint and add faux fur hair. The heavy original sculptures crumble when they dry out, so I did quickly make a second copy and set it aside, thinking Prince may eventually need to appear in more than one place or with a different costume. This was quite fortuitous...

Erin Sharkey made the cardboard symbol guitar and a clothing designer, Felicia Perry, made his costume. A young man named Amra walked him in the parade and a photo was included in an article in Ebony magazine. Steve Ackerman, MayDay Site Coordinator, animated him in the ceremony. Afterwards we propped him up against a tree near Powderhorn Lake for a few hours while everyone took a break before cleaning up. There was a never-ending line of folks taking selfies with him all during that time. My own photo of him was accepted into the Minnesota History Museum collection.

Over the summer of 2016 he was in several parades and festivals across the Twin Cities (animated by Silvano Aguilar), Homegrown Music Festival in Duluth, and my featured art show at Austin, MN, ArtWorks Festival. Prince was always met with so much enthusiasm. Sadly his head disappeared November 4th at Duluth All Souls Night, which is an event that honors ancestors, of which I am artistic director. There was quite a Facebook flurry as everyone I knew in Minnesota shared the word to look out for him. Finally in May 2017 someone tipped me off that a man in Superior, WI, was trying to sell him on Facebook. I was in Massachusetts and called the police to follow up on a report I had on file. Unfortunately they were unsuccessful in recovering him.

Then early this year seven of my ancestor puppets were invited to Washington National Cathedral in Washington, DC, for a Cosmic Mass celebration of Martin Luther King with my mentor, Rev Dr Matthew Fox. Fox is a fan and so disappointed to hear Prince was not available. I decided to finish the second copy as the older, wiser Third Eye Prince in time to make the journey to DC. Third Eye Prince was enjoyed by motorists who could see him through the car window and enthusiastically received at the event.

We are so honored to be included in the Symposium, and then the People's Museum. Thank you!
Mary